Comments Off on Colour me Yellow: A book review 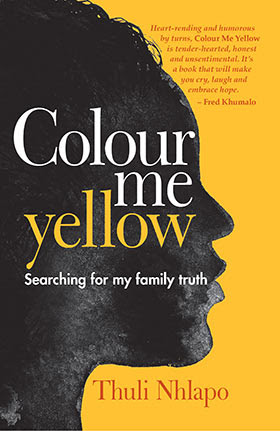 Colour me Yellow: A book review

Thulisile (Thuli) grew up knowing that her mother resented her, her mother would tell her that she hated carrying her in her stomach, hated being pregnant with her. Thuli knew there was something wrong with her but no one in the family told her why. She grew up being called different names because she looked different from other children, she was called Boesman, yellow and all other sorts of derogatory names. She hardly had friends because she was different even her cousins isolated her because she was different. Thuli vowed to study hard and be something in life to prove to everyone in her family that she was capable.

Her mother got married when she was still pregnant with her and she was told that her mother’s husband was her father but she knew it couldn’t be because she looked different from her younger siblings and her mother’s husband and his family always treated her like an outcast. She tried several times to ask her mother about her identity but the mother would be extremely upset and even tell her that she is ungrateful as her husband was feeding her and looking well after her even though they all knew this was a lie as Thuli was treated differently from the other kids.

She fell pregnant when in her final year and also had a difficult pregnancy but boyfriend’s family was very supportive, her family disowned her. She finished her tertiary studies, started working, got a place of her own to stay and decided to continue searching for her identity. One of the relatives gave her an address to a man’s house who she calls Mr O, the relative had said she will get answers when she gets there. She found incomplete answers there but her identity still haunted her. Her identity is later revealed, after searching and searching and She eventually found inner peace after this was revealed to her but devastated her uncle.

This memoir details the pain, struggles that one can go through because of family secrets. The horrible treatment also affected her health and also made her to develop a hard surface as she could not easy show feelings.

This is a sad story of how family secrets can actually harm the very same person that the secret is being kept from. Thuli Nhlapho went on to be a successful award winning journalist and a writer.

A review by Funeka Khumalo